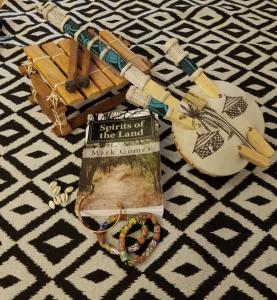 In Spirits of the Land, Sumaguru of the Sosso tribe is famous for inventing the balafon.  This instrument is featured throughout the story.

“The people ate well tonight,” Kon said to Doua.  Listening to the people sing and dance to the rhythm of tam tams and the strings of the kora made him smile.  It was the haunting tones of the balafon that made him think about the future.

The following information comes from the website Stream Africa http://streamafrica.com/culture/the-balafon/

There are several idiophone instruments in West Africa, one of which is the balafon. The balafon, also known as balafo, bala, Balani, Gyil, and Balangi, is a type of tuned percussion instrument. It is played by using two padded sticks to strike the tuned keys.

Now, where did the balafon originate and what makes it special?

An instrument known to have existed since the 12th century CE during the Mali Empire, the balafon has been and still is popular in West Africa. Its name has a Manding origin but the name varies in some parts like Sierra Leone, Ghana, Cote d’Ivoire and Burkina Faso. Balafon means the “act of playing the Bala,” with “Balan” corresponding to the instrument, while “fo” a verb meaning “to play” in the Malinke language.

Guinea’s Susu and Malinke peoples, as well as the Manding people dwelling in Senegal, Mali, and Gambia are the popular users of the instrument. Balafon traditions were also recorded in Chad, Cameroon, and around the Congo Basin.

In ancient times, the balafon is considered a sacred instrument that is exclusive to trained and skilled caste members. It was stored in a temple for safekeeping and can only be played at certain traditional and ritual occasions such as funerals, weddings, and festivals. Not to mention that the balafon has to be purified first before being played.

The balafon is played in a wide variety of ways, depending on the culture in a certain area. Some hold solo balafon performance, while others, especially those from Cameroon, create an orchestra consisting of six balafons. The instrument can also be a part of an ensemble, just like in Guinea and Mali, where people use an ensemble of three: low, medium and high pitches.

There are two main types of balafon. One is called the fixed key, which involves a fixed frame with keys strung over it. Most of the time, calabash resonators are placed underneath it. The other type is the free-key balafon. Its difference is that the keys are independently attached to a padded surface. The typical balafon features 17-21 keys. It is up to balafon players what kind of tuning they want – tetratonic, pentatonic, or heptatonic scale.

Given balafon’s rise to popularity, many artists have started using it in their music. Among the most famous ones include Ba Banga Nyeck, El Hadj Djeli Sory Kouyate, and Modibo Diabate. Balafon players can be found all over Africa and other parts of the world. The sound created by balafon is associated with jazz and other music genres.